TOS Design it’s a regularly issued american brand retained by the Board of Trade’s office in Washington, but still, its conceivers, founders, managers and designers are truely Italian!

TOS Design’s layout actually begins in 1992, but it has its realization only after eight long years, that is in the year 2000.

In 1987 its promoter, Mr. Stefano Cecchi, at the age of 22, starts working as supervisor in the varnishing sector at Mercedes Benz where he’ll get to know, some years later, two clothing and sporting goods importers: one Italian and the other one American.

He created a thoroughly new racing clothing Company, the one and only! Sponsoring Supercross and National american pilots allowed Mr. Cecchi to provide clothing in Italy. And that was it: a perfect Italo-American joint venture. 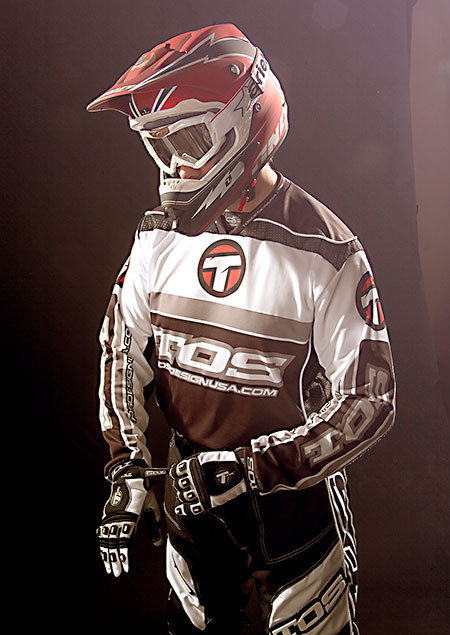 But the two sponsors turned to be wheeler-dealers more than well-off ones and so they left Mr. Cecchi just when the game kicked-off!  It would have been a pity just to give up that dream while it was becoming true… and that’s why Mr. Cecchi decided to keep on going on his own. At that point, he sold his working tools and supported his business trying to do his best to make his dream come true and so to be able to launch his brand into the Motocross world. That’s how TOS Design started to get going.

His masterpiece is the long racing pants with a double layer material over the knee area (patented). This characteristic, the curious logo and the monochromatic coloration embody the success of TOS.

Meeting Team Manager, Mr. Fabio Vallerini, has been essential as well since, during the World MX in 2001, he trusted the new brand enough to make his two pilots, Bricca and Oddenino, wear those strange long pants.
No big surprise then if, in such a classic and conservative world such as the motocross’one, the experts were nearly shocked and amazed. TOS gained finally a special place in the racing design sector. The collaboration with Enrico Oddenino carried on. Furthermore, the pilot won the first place in the world championship last year, ending even among the top five places of the World MX3!

Meeting Mr. Jarno Boano (Beta Racing Team Manager of the international off-road) and Mr. Beppe Diena, who is currently in charge of TOS image and styling, have also been extremely important.  Finally, in 2005, Beta Racing chose TOS clothing line, so that the brand has been traded all over the world.

The production, for samples or small quantities, from 10 to 50 pieces, for Team or Motorclub is made in Italy; over 500 pieces in Eastern Europe and over 5000 in the (Far)East although there is always an italian operator supervising the whole work process!

Our production ranges from MX long classical suits to racing jackets or typical free-stylers clothing (short pants and egocentric t-shirts), from gloves to socks, protection patches and more… from casual to free style, from sportbags to fanny packs…